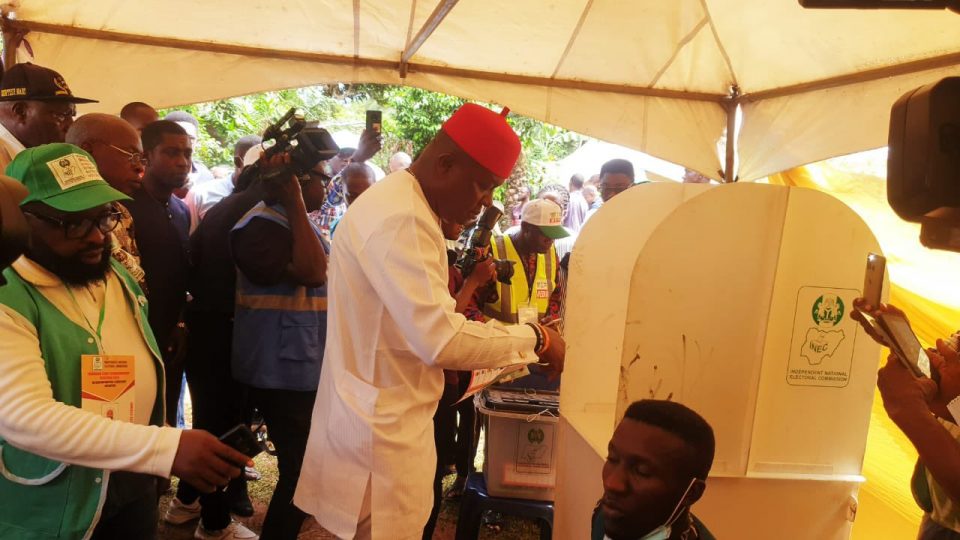 Ozigbo complained about places where election materials and officials had not arrived at about the time he voted.

Mr Valentine Ozigbo, candidate of the Peoples Democratic Party (PDP) alongside Orjiugo, his wife, cast their vote at PU 010, Social Centre square, Amaesi Ward in Aguata Local Government Area of Anambra at about 11am.

Ozigbo, who voted after about 20 minutes of accreditation delay, expressed worry that all willing electorate might not be able to vote if the 2:30 pm deadline set by the Independent National Electoral Commission (INEC) was to be adhered to.

He said the deadline should be relaxed to allow all eligible voters cast their ballot if the problem was not their making.

He said there were places where election materials and officials had not arrived at about the time he voted.

“I want to thank God for the clement weather, a moment ago, I and my wife fulfilled our own part of the obligation which is to cast our votes

“Thank God it it peaceful and we have been able to vote, but it is a mixed feeling, I am a bit worried by the time it took us to vote, verification by Bivas device was slow.

”We had to use hotspot before it worked, while I commend INEC for the technology, I want to say that it must be improved.

“So, I call for extension of time to ensure every eligible voter votes if it is not their cause, I am expecting a minimum of one million people to vote out of about 2.5 million registered voters.

The PDP candidate said INEC took the allegation of writing of results and subversion of the process seriously while calling on other political parties and entire Anambra citizens to guard against electoral maleficence.

He said the election was widely participatory as a result of the relaxation of the IPOB’s sit-at-home which posed a major threat to the election.

“Some people are desperate about this election and in that desperation, they can do anything, they want to write results and push it in.

“I am calling on my agents and indeed agents of other political parties to guard against that and ensure that only what transpired at the polling units are recorded,” he said.